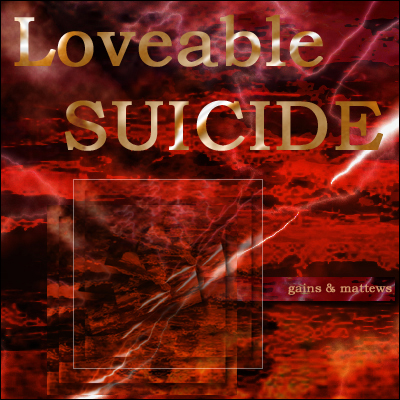 Loveable Suicide was first recorded in 1990 with Daniel Sjöberg on vocals but as I felt the recording was rushed and Daniel wasn’t within his comfort zone as a singer and as a result I wasn’t really satisfied with the end product and decided to move on and fix it later as I had other ideas filling up my brain. Instead I started writing and recording the triple album Annie Palace and then in 1993 I moved on to writing and recording LoveOnLove. In 1994 I re-recorded Loveable Suicide with myself on lead vocals.

Mathias Lewentorp contributed with background vocals here and there and I kept some of the tracks laid down by Daniel.
We had a sweaty great time recording both versions of Loveable Suicide, lots of fun and sweaty memorable!

When I decided to release most of our albums in 2016 I had a conversation with the lawyer for The Beatles because while we were recording the vocals on The Fire Your Kiss Lays On Me in 1990, Daniel started singing Let It Be during my guitar solo at the end of the song, which sounded really cool by the way, but as I knew this would get me in trouble with copyright infringement I asked the lawyer how to proceed, he said I needed to add Lennon–McCartney as composers or there would trouble for me. Although I didn’t mind having trouble with The Beatles and the lawyer I didn’t want to add Lennon–McCartney as composers to our song as they weren’t really the composers of the song as a whole, just the jamming by Daniel during my guitar solo. So I removed the Let It Be part from the guitar solo using my channel mastery skills and then I added some new wah-wah guitars and panned the guitar solo from right to center to hide what my channel mastery skills didn’t remove and then back to the right when he stopped singing and then to center again when Daniel did it the second time and then back to the right again, as it was supposed to be in the first place. I had to do it that way because the master tapes were destroyed while in storage so I only had the stereo mix to work with. But hey, it was fun recording some new wah-wah guitars 26 years later, Loveable Suicide Revisited.

That’s the story about The Fire Your Kiss Lays On Me vs The Beatles vs Gregory Gains.

I had a similar problem with King Greys Memorial Report from the album Viper Vienna and Bachman Turner Overdrive’s song Not Fragile.